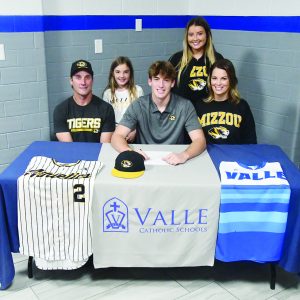 Valle Catholic High School outfielder Aiden Heberlie made it official during a ceremony last Wednesday evening, signing with the University of Missouri.

So, what are Heberlie’s chances of finding success in NCAA Division I, the highest level of collegiate baseball?

“Aiden’s athleticism can play anywhere in the country,” Valle Catholic head baseball coach Nathan Gegg said. “He has proven that at every showcase and every national tournament he and his summer team have competed in.”

Missouri coming off a rough season, with a 15-36 overall record and 8-22 in the rough-and-tumble Southeastern Conference.

The Tigers are coached by Ste. Genevieve native Steve Bieser. Missouri will open the 2022 SEC schedule at national powerhouse Vanderbilt on March 18.

“It means a lot to officially accomplish my dream of playing college baseball,” Heberlie said in an email to the Ste. Genevieve Herald. He noted he hasn’t talked directly with Bieser yet about his possible role on the team.

Aiden said his size and speed will help set him apart for success at Missouri.

The past two summers, Heberlie has played for the Athletics’ program, and his coach Luke Miller was present for the ceremony.

“He will have to continue to improve his defense and his bat and hand speed,” Gegg said. “But, there’s nothing he can’t do on a baseball field. He has power, he has glove and a capable arm at the Division I level.”

Heberlie’s speed — running the 60-yard dash in 6.55 seconds — places him in the top five percent of the graduating Class of 2022.

Gegg said once Heberlie focuses on just baseball, “the sky is the limit.”

Heberlie’s other statistics are impressive as well. Aiden’s outfield velocity ranges from 85-87 mph, and he’s produced exit velocity with his bat from 92-94 mph.

These are the gauges modern baseball scouts use to determine a players’ possibility of success in the college and professional ranks.

Heberlie, who stands 6-foot-3, 185 pounds, both throws and bats right-handed.

“I think Aiden learned to deal with hitting in the middle of the order and that entails,” Gegg said of Heberlie’s junior season in 2021, in which the Warriors reached the Class 4 state quarterfinals and finished with a 28-5 record.