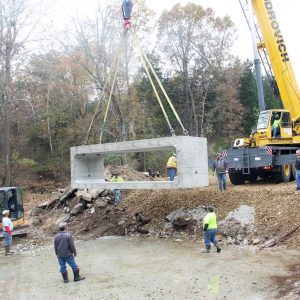 Despite a few last-minute frustrations, the long-anticipated Kocher Road box culvert job was completed on Nov. 10, to everyone’s satisfaction.

Things didn’t get off to the best start that morning.

“We called them Monday, we called them Tuesday,” Presiding Commissioner Garry Nelson said. “The first section was supposed to be there at 9 a.m., with sections arriving at 20-minute intervals. The first one arrived at quarter after 8.”

Plus, Budrovic Crane Service of Scott City had last-minute complications with the Missouri Department of Transportation (MoDOT) regarding their permit to move teir equipment on state highways. Therefore, the crane was an hour late getting to the site.

“They’ve got to get a permit to move a big crane like that,” Nelson said. “So, late Tuesday evening they got notified by MoDOT that they wouldn’t let them go across that bridge.”

That led to a little frustration the morning of the work.

A few adjustmets had to be made. The culvert was put in at a slight angle for best results.

“You put things on paper, then dig a big hole,” Nelson said. “You’ve got a road going one way and a creek going the other. When you get there, you’ve still got to make small adjustments.

“It worked out for the better. I’m pleased with it.”

The project fell on a week in which the commissioners met only once, due to Thursday being Veteran’s Day.

One issue the commission discussed during the Monday, Nov. 8 meeting was the issue of salvaging tanks from a demolished dump truck to use on another truck.

The county had destroyed Truck 11, a 2005 International dump truck, as part of the Diesel Reduction Act (DERA) Grant it had gotten to pay for about 25 percent of a new truck. It had to have a hole drilled in it block and its frame cut in half and photos sent in as proof. This had to be done to receive the grant money. However, the trucks demolished like this are always stripped of usable parts, like beds, etc., first.

“We had a truck with both gas tanks leaking,” Nelson said. “We don’t use it very often – usually just for snow. It’s single-axel. Instead of trying to patch it, we need to get new tanks.”

It had been hoped that the tanks from Truck 11 might be salvaged and put on this truck. Unfortunately, though, they would not fit.

“We’ve got to be ready for snow,” Nelson said. He said it would be readdressed at the Nov. 8 meeting.

A check was written out for the 2022 Western Star dump truck. Nelson said that was done at this time so proof could be turned in for the DERA Grant.