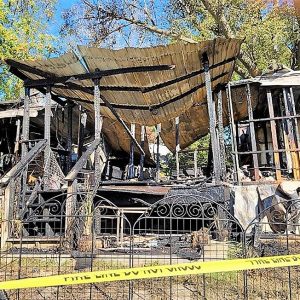 At 1:29 a.m., Sunday, the Ste Genevieve Fire Department, along with the St Mary and Ozora departments, were called for a residential structure fire in the area of Washington and Third streets. The first arriving units encountered heavy fire in the middle of a mobile home. The owner was able to get out before the arrival of fire department and was treated and released for burns and smoke inhalation.  Two canines perished in the fire.  The fire appears to have to started in the area of the living room where a portable heater was being used, according to fire chief Ken Steiger.  The fire was under control in less than an hour. It was the third house fire in town in three weeks. (SUBMITTED PHOTO/Special to the Herald)