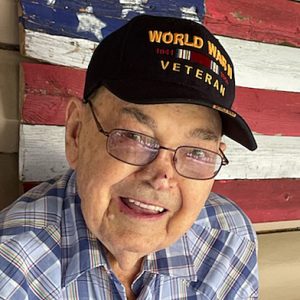 Young, Gilbert “Pete”,96, of Bloomsdale  died Thursday November 4, 2021, at his son’s home in Festus. Pete was a laborer at General Motors and was a member of American Legion Post #554 in Bloomsdale. He was an avid bowler, an artist and enjoyed woodworking, fishing and loved playing cards. He was also named Patriot of the Month from the Daughters of the Revolution. Born February 3, 1925 in Grafton, Illinois, he was the son of the late Diamond and Hallie Young. He was preceded in death by his wife, Joyce Eileen Young (nee Ball). He was the father of Robert “Joe” (Margaret) Young of Festus and Kathleen (Donnie) Pope of DeSoto. He was the grandfather of Patrick, Angie, Christina, Jennifer and Rob. He was a great grandfather of Dustin, Mathew, Alyssa, Chelsea, Alexis, Madalyn, Katie, Eli. Chloe and Lennon. He was a great great grandfather of Leah, Carson and Paisley. He was also the brother of Margaret Harlan, Howard (Marylou) Young, Harrietta (Clifford) Reynolds, Lester (June) Young and the late Dick Young and Gladys Pherrigo.

Visitation is at 9 am until funeral service at 11am on Wednesday November 10, at Kutis South County Chapel, 5255 Lemay Ferry Rd., in south St. Louis County. Burial is in the Warrenton City Cemetery. Memorials may be made to the Greater St. Louis Honor Flight. Arrangemants are under the direction of Kutis Funeral Home.