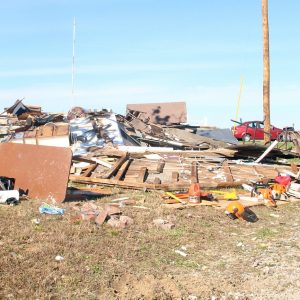 The same tornado that swept through southern St. Francois County and later it St. Mary, also barreled through Coffman on Oct. 24.

The unincorporated community and surrounding area was hit hard, with four buildings destroyed and several damaged.

Gene Thurman, an elder at the church, was working with a group of volunteers from the Emergency Response Team of the Missouri Baptist Association, in repairing the church building and cleaning up debris last week.

The old school building had served as the community school from probably the 1940s until the 1960s, according to Thurman. In recent years, the church had used the school building as a fellowship hall.

Thurman said the church had just held a surprise appreciation reception for pastor Mark Dean and his wife Becky in the building the morning of the tornado.

“That morning, instead of Bible study, we had an appreciation surprise,” Thurman said. “We had a very nice time. We had, not a meal, but muffins and coffee and different things like that. We had a real enjoyable time. Then, at 9 o’clock that night, it was gone.”

Many people in the area flocked to the church basement for shelter during the tornado.

“There were 12 people in the basement of the church, people living in mobile homes, don’t have basements, they came up here,” Thurman said. “They were pretty scared. One of the guys told me when you hear that it sounds like a freight train, he said that’s exactly what its sounds like. Fortunately, no one was hurt.”