The project, originally scheduled for September, had been pushed back to October and finally into November, due to material shortages. Fortunately, Aaron Braun LLC, the winning bidder to install the culvert and remove the old low-water slab, was still available for the November date . So was Budrovich Crane Rentals of Scott City.

Road and bridge foreman Scott Schmieder reported Thursday that he was making preparations to be sure the trucks delivering the large concrete segments of the box culvert from McCann Concrete in Dorsey, Ill., can navigate the curvy roads.

He said overhanging limbs were being cut, among other things. 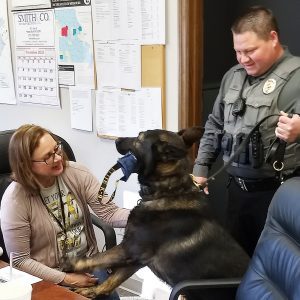 “If vehicles can’t make the curve, we’ll have to remove some old fence posts, then put them back in afterward,” Schmieder said. He noted that the posts in question no longer have wire on them making the operation much simpler.

A gravel pad was also built at the bottom of the hill, in case equipment needs to be parked there during the project.

Meanwhile, “Road Closed” signs wee prepared to go up for this Tuesday and Wednesday. The plan was to remove the old slab on Tuesday and to install the new box culvert on Wednesday morning.

Schmieder was also working with Citizens Electric Corporation  to drop wire lines prior to the project.

Schmieder also reported that the John Deere grader was in the shop, having its troublesome wiring harnessed  repaired..

He also said his crews have been making sure the county’s snow removal equipment is ready to go whenever needed.

Schmieder reported that pipes had been installed on Mill Creek Road, as well.

Finally, Schmieder said his men will be sealing cracks on Lawrenceton Cutoff Road and Roth Road before and weather hits. The commissioners agreed it is important to protect the two big recent paving projects. First District Commissioner Karen Stuppy called the projects “a big investment.”

CALL ABOUT TRUCK LEADS TO ACTION

A call had come into the commissioners from a Bricky’s Road resident that a dump truck from one of the area construction projects had  driven past a stopped school bus with its stop sign out. The caller also said some of the trucks speed along the toad and that drivers have been forced off the road by them.

Sheriff Gary Stolzer investigated the school bus incident. He interviewed the bus driver and reviewed the bus’s video of the encounter. He also talked to Michael “Buck” Jokerst, manager of Fallert Bus Services.

Presiding Commissioner Garry Nelson said that Stolzer, after reviewing all the information, “will take the appropriate action.”