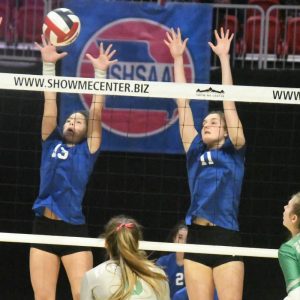 “It was a different situation to be in,” Valle Catholic head coach Nancy Fischer said. ”We were disappointed by the loss, and we had to play another match.”

Paraphrasing Fischer, there were both physical and emotional obstacles to overcome — and Valle Catholic did just that.

Valle Catholic’s third-place match was delayed by 35 minutes, and when a Storm hitting error went deep, it gave the Warriors their 25th point in the third set the gymnasium clock read 9:50 p.m.

Fischer said the Warriors were “a little tentative” blocking early on in the third-place match.

As the match went on, Valle Catholic began blocking and swinging better along the front row — and served aggressively to pile on the points.

A Makayla Joggerst kill gave the Warriors their first lead of the opening set at 11-10. Notre Dame di Sion deadlocked the score at 11-all; however, Hailey Weibrecht scored a point on a tip.

Valle Catholic (32-5-3) didn’t trail the rest of the set, and Ella Bertram and Macy Wolk joined forces on a double-block combination to give the Warriors a one-set lead.

A Joggerst free ball caught Notre Dame di Sion (17-16) off guard on the final point of the second set, and the Warriors won by 11 points.

On the final point of the match, Valle Catholic libero Rachel Blum had a dynamic save to keep the action alive — and ultimately the Storm made a mistake along the front row.

Valle Catholic recorded a .290 hitting efficiency, and played so well on defense to keep Notre Dame di Sion to a paltry .011.

The Warriors had a 42-27 edge in digs and 40-11 edge in assists, additional telling reasons for such a clear Valle Catholic victory.

Ade Weiler went on a lengthy serving run in the second set as Valle Catholic rolled to a 13-5 lead.

However, the Falcons began whittling away at the Warrior lead and Autumn Bax finished off Valle Catholic with a block — taking the second set, 26-24.

The situation was reversed in the third set, with Valle Catholic rallying for a 26-24 victory behind Sam Loida’s game-clinching ace serve.