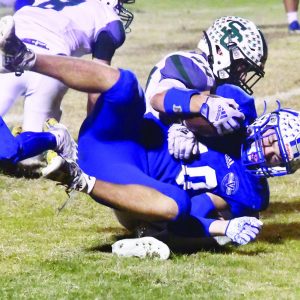 When Zach Boyer raced away on an 80-yard TD with 11:05 remaining in the fourth quarter, the Ste. Genevieve football team sliced Valle Catholic’s lead to 49-35.

That’s the last time the Dragons would score as the Warriors tallied the final 20 points of the contest en route to a 69-35 Class 3 District 2 semifinal victory at Father John Dempsey Field last Friday.

Ste. Genevieve head coach Jay Pope credited the Warrior special teams for helping keep the Dragons off the scoreboard the rest of the way.

“That second half, they were able to pin us down deep in our own territory and we just couldn’t get out of the hole,” Pope said. “They also forced a fumble in the fourth quarter that I felt was the final blow.”

Valle Catholic’s Collin Vaeth recovered that fumble, and Bryce Giesler scored his sixth TD of the game on the very next play.

The Dragon crowd was silenced, and the unbeaten Warriors (10-0) began anticipating their playoff rematch with St. Mary’s (St. Louis) at 7 p.m. this Friday. Still, Ste. Genevieve finished with a 7-4 record, a three-win improvement over 2020.

“Bryce had an amazing game for us,” Valle Catholic head coach Judd Naeger said of Giesler, who rushed for 283 yards and caught one pass for 49 more. “He played very hard, and benefited from a very good offensive line and fullback play.”

Naeger said the Warriors didn’t necessarily make second-half adjustments, rather it was all about assignment football.

“We just talked at halftime about doing your job to the best of your ability,” Naeger said, “and not try to do more than you should. We did a good job of that for the most part in the second half.”

This game was an electric back-and-forth affair for more than three quarters, and explosive offenses generated nearly 900 yards on 118 plays overall. Fans were filled with emotions, living for every snap.

“Zach has been the catalyst for our offense this year,” Pope noted, “and he was again for this game. I don’t think people understand how good he really is, and how absurd his stats are for this year.”

Springkamper knotted the score at 21-all with an 8-yard TD run after Carter Klump intercepted a Chase Fallert pass late in the second quarter. Grant Fallert was forced out of action for a brief moment when Klump picked off Chase.

Valle went into the break with momentum after Giesler had a 12-yard TD run on a pivotal third-down play. The Warriors were up 28-21 at halftime.