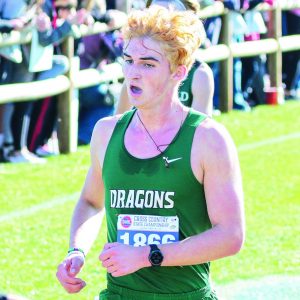 St. Clair earned a medal with his 19th-place finish, clocking in with a time of 16:50.0 on the five-kilometer course at Gans Creek Park during the Missouri State High School Activities Association Class 3 boys’ state meet.

“It was great to see Nathan run a lifetime personal-record time,” Ste. Genevieve head coach Sierra Boyd said. “It is always great for the program to have athletes on the awards podium at state.”

Since he placed in the top-25, St. Clair also earned all-state honors — a perfect cap to a stellar four-year career for the Dragons.

Last year, St. Clair was part of a complete Ste. Genevieve squads that finished 10th out of 16 teams — along with older brother, Devin.

Nathan St. Clair improved immensely throughout the course of the season, and he beat his time from the 2020 state meet by roughly 80 seconds.

Ste. Genevieve senior Levi Wiegand also improved from 2020 to this year, recording an 85th place finish in a time of 18:12.8.

“Levi qualified for the state meet for the second year in a row,” Boyd noted. “He ran much better this year at state, and had a season personal-record time.”

Only two of three Ste. Genevieve girls were able to complete the race, freshmen Hollyn Zangaro and Kayden Huck.

“It was exciting for Hollyn,” Boyd said. “It will take hard work in and out of season in the coming years; but, hopefully, she will be able to work her way to all-state honors in the future.”