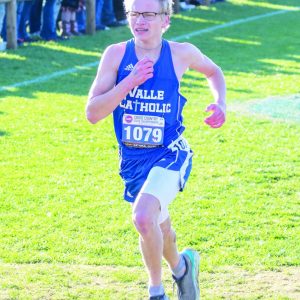 Valle Catholic’s Peter Roth strides toward the finish line during the Class 1 boys’ race at Gans Creek Park in Columbia. (PHOTO BY CHRIS AUCKLEY/Motrackfanatic.com/Special to the Herald)

Valle Catholic junior Peter Roth produced the top performance among all county runners at the meet — taking fifth in a time of 17:04.3.

“We ran as good as we possibly could,” Zoughaib noted.

Roth’s effort was needed in more ways than one, because Zoughaib had to shift his running line-up due to health concerns. Since Roth finished among the top-25 runners, he also garnered all-state honors.

“Peter led the boys to a fourth-place finish,” the coach commented.

Zoughaib noted typical No. 4 runner Austin Ringwald was dealing with an unspecified injury leading up to the race. Garrett Shortt and Joseph Flieg both suffered from fevers, with Flieg unable to run at all.

“Considering we didn’t have number four, five and six, and substituted seven and eight to run for them, and still finished fourth as a team should tell you how talented this group is,” Zoughaib said.

Valle Catholic’s boys finished with 162 points, which was seven points more than third place Wellsville-Middletown. The Warriors scored three fewer points than Van Buren, a team they faced at the district meet in Ironton the week before.

On the girls’ side, Valle Catholic freshman runner Madelyn Griffard made an impressive debut with a 22nd-place finish in a time of 20:57.2.

And Griffard earned all-state distinction in the process.

“On the girls’ side, we did everything right,” Zoughaib said. “We had personal records all over the place. The girls ran a perfect race, and just got beat by four better teams.”

Valle Catholic totaled 190 points for fifth spot, which was 16 more than St. Pius X (Kansas City). The Warriors were 18 points better than Steelville (208).

This marked the final scholastic races for Camryn Basler, Katie Kertz and Lillian Hoog. These three girls were major cogs in Valle Catholic’s second-place finish in Class 1 the previous year.