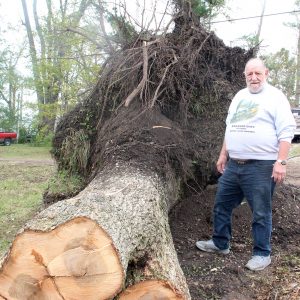 Above, Henry Pinkley of Schwent Drive stands beside a huge uprooted pecan tree in his yard. Below, another of the huge trees that was uprooted like a weed. This one was near Melvin Frelix’s home on Church Street. (Photos by MARK EVANS/Herald staff)

The peaceful lives of residents in St. Mary and Coffman were shattered when EF-3 tornados crashed into the small towns, as well as hammering areas in Madison, St. Francois and Randolph (Ill.) counties.

St. Mary was hit hard, with 30 homes affected, according to county emergency management director Felix Meyer, plus one business. Five structures were destroyed, including one business. In Coffman, four houses were destroyed and the Baptist Church was damaged. Some buildings at Crown Winery were also damaged.

Of course, the numbers don’t tell the story of the horrific event. Several St. Mary residents were willing to share their tornado experiences as they continued cleaning up their property last week.

“I had been watching the storm because it wasn’t raining,” said Pamela Smith of 816 Seventh  Street. “And it got real noisy. Then we went to the interior of the house.

“We had one window blow out. I could feel the suction and it was just over in a minute. I looked outside and the birch tree was gone, then we noticed how many other trees were down.”

John Stennett of  527 Sixth Street wanted to make sure his mother was safe in their basement.

“My son and a friend kept calling me and saying to get down in the basement,” said Betty Bruckerhoff Stennett, 78. “I said, I don’t know; it was pretty quiet here. Finally, I did go down in the basement and set down on the second to bottom step and waited about half an hour. Then, all of a sudden, it got real still. Then I heard the wind pick up. I didn’t hear a train or anything, but I did hear wind pick up and heard all the glass shatter and everything.

“It sounded like softball-sized hail. When I looked at it the next day, there was great big dents on top of my car, but I guess somehow the pressure must have popped them back out.”

She described the tornado’s strike.

“It just came and swooped and took the front porch out, took the wrought iron railings out,” she said. “It got some windows and sucked the wall out in my mom’s bedroom and in the bathroom. Good thing I had insurance. It covers all this.”

Sixth, Seventh and Church streets were in an area that was hit hard. So were Third, Fourth, Cedar and other parts of town.

“People were all checking on each other,” Pamela Smith said. “We were without power three and a half days, but the disaster relief people were just awesome. People took down all those trees and hauled them away and the electric company did get on top of it right away.”

The storm, hitting around 8:30 p.m., came and left quickly, by all reports.

“It was just very fast and I’m glad we live in a brick house. We were lucky,” Smith said.

“I heard the tin buildings [being destroyed] and whatever, whenever it hit, but for me it didn’t seem to last no longer than one minute,” said Shirley Grogg, who has lived at 727 Seventh Street since 1980. “But you walk back there and you can see what it looks like.”

Grogg has a steep hillside, falling into a ravine behind the yard. He pointed out a piece of the antique mall roof, lying in the back yard.

Huge trees were mangled and had been trimmed by Thursday.

“My daughter and I planted that three right there and she’s 37 years old now,” he said, pointing to one of the giant trees that had already had their limbs removed with chain saws. The area, which he said he cleared off with a tractor in 1981, was again strewn with debris of trees.