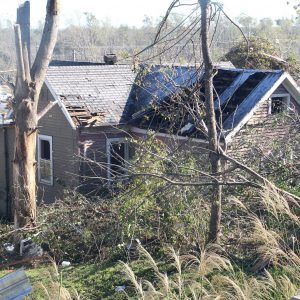 Power was restored to most, if not all St. Mary residents by Oct. 27, as massive clean-up and salvage efforts continued following the devastating Oct. 24 tornado that cut through both Coffman and it.

County emergency management director Felix Meyer reported that 30 houses in St. Mary had been affected, plus one business. He said five structures and one business were destroyed.

In the Coffman area, Meyer said four buildings were destroyed. The Baptist church also suffered damage as did some buildings at Crown Ridge Winery.

The response to the EF-3 tornado (one of five in the region) was phenomenal. Offers to help from numerous counties and cities had to be declined due to limited space to operate.

“Felix and Scott were down there immediately,” he said. “Felix took the 911 command center down there.”