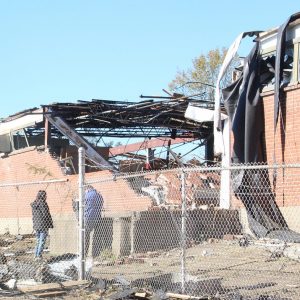 The one-time Prince Gardner factory, built about 1953 and the home of St. Mary Antique Mall for nearly 40 years, was devastated by the tornado. The Joe Scott family, who owns the property, is assessing options of repairing or rebuilding. (Photo by MARK EVANS/Herald staff) 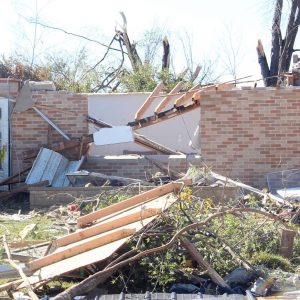 This home on Seventh Street (above) was one of the St. Mary structures destroyed by the FE-3 tornado. (Photo by MARK EVANS/Herald staff)

Five tornadoes struck the region the night of Oct. 24, according to Weather Underground.

One was reported in Black, Mo, two in Fredericktown and one that smashed through southern St. Francois County, then hit Coffman, St. Mary and Chester, Ill.  It was an EF3 that went 42.4 miles with maximum winds of 151 miles per hour.

Only one injury was reported in Ste. Genevieve County during the EF-3 tornado. This is a remarkable figure, compared to past tornadoes.

Missouri has a deadly tornado history, located at the edge of what has been called “tornado alley.”

First, there was the legendary “Tri-State Tornado” of March 18, 1925 caused 695 deaths in Missouri, Illinois and Indiana. There were 11 deaths in the region, which saw Annapolis, Biehle and Frohna hit. That storm is now considered to have been an EF-5, with 300 MPH, traveling 219 miles in 3.5 hours.

On May 9, 1927, Poplar Bluff was hit, with the high school destroyed and between 85 and 96 killed, depending on the source.

Closer to home, in May 1956 Desloge High School was destroyed just days before graduation. Eight people were killed when the tornado barreled through Desloge.

Injuries have not disappeared even with modern warning systems.

The last EF-4 tornado to strike Missouri was the Sept. 22, 2006 tornado that flattened Crosstown in Perry County and headed into Illinois. There were six injuries in that storm.