Initially McCann Concrete, the Dorsey, Illinois firm who manufactures the culverts for the county, had indicated it would be “done” on Nov. 3.  However, the commissioners found out last Thursday that instead of being complete on Nov. 3, the concrete would be poured on that date. Another five days or so will then be required to let the concrete cure enough to withstand the weight the box will have to bear.

There fore the tentative dates are now Monday, Nov. 8 to remove the current slab and Tuesday, Nov. 9 to install the new culvert. Te commissioners were going to check with the winning installation bidder, Aaron Braun of Braun Excavating and Budrovich Crane Service will be available Nov. 9.

Scott Schmieder, road and bridge foreman, presented a bill for $13,712 for transmission repairs to Truck 7, a 2011 Freightliner that had been in a St. Louis-area shop for weeks, awaiting a scare part.

Schmieder also reported that the leased tractor had been picked up by Sydenstricker Nobbe Partners. However, the tires were nicked and cut by gravel and had to be replaced. The commissioners agreed that they will keep the old tires and put them on in place of the new tires when they lease a tractor next summer, thus saving the expense of replacing the tires upon return of the tractor.

Schmieder also reported that the John Deere grader will get the electrical harness work it has been needing on this Monday. He also noted that the Ford backhoe will need four new tires by spring. It is in the 2022 budget.

He also said two more pipes had been installed on Mill Creek Road and that crews were getting back to patching and mowing after their emergency help in St. Mary, following the tornado. (See related story.) 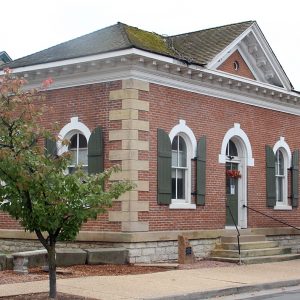 While it is not feasible to staff the Ste. Genevieve Chamber of Commerce office (located in the old “fireproof clerk’s office,” built in 1875, above) 40 hours a week, executive director Dena Kreitler may also be contacted at the license office. (Photo by MARK EVANS/Herald staff)

Dena Kreitler, executive director of the Ste. Genevieve Chamber of Commerce, had told the commission that a lot of calls had come in, complaining that the chamber office was frequently closed.

She wanted to emphasize that she is available if needed.

“Dena is one of two places,” Garry Nelson presiding commissioner, said. “If she’s not at the chamber office, she’s at the license office and can be reached there. She’s more than willing to see you.”

He noted that since Kreitler is officially listed as the license office manager, state statute requires she spend a set number of hours there per week.

Meanwhile, it is not feasible to have someone in the chamber office whenever Kreitler is out.