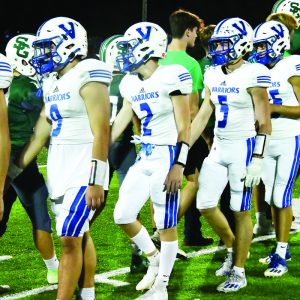 Are you ready, football fans?

When the Missouri State High School Activities Association bumped the Valle Catholic High School football team to Class 3 in 2020, everyone in Ste. Genevieve County had a sneaking suspicion the Warriors and Dragons could become playoff opponents.

That has become our reality.

“It should be a fun atmosphere for everyone,” said Valle Catholic head coach Judd Naeger. “This is certainly a new dynamic for the rivalry.”

“I’m not sure anyone can describe it because this has never happened before,” said Pope, a former Valle assistant under Naeger, “which will likely add that much more juice to the game.

“I hope everyone will come out and support all these young men, and their hard work this season,” Pope said.

The Warriors (9-0) will be rested, having drawn a first-round bye. It’s unclear whether Chase Fallert will be available to play, Naeger said last week in an email interview with the Herald.

Naeger heaped plenty of praise on the Dragons, who have posted a three-win improvement from 2020.

“Ste. Genevieve has improved in all facets of the game,” the coach commented. “They have really come together. Ste. Genevieve has diversified their defense, and are capable of being very good in numerous fonts and coverages.”

Valle Catholic has stayed the course after Chase Fallert was injured in the Warriors’ victory at St. Dominic in September. Grant Fallert, Chase’s cousin, stepped in and kept them on track.

“Their tendencies are much different with Grant fielding snaps,” Pope said. “But, the Valle coaching staff has done a great job of putting him in a position to be successful without having to change their identity on offense.”

Said Naeger, “The keys to victory will be the same as every game. Win the turnover battle, and play great in all three phases.”