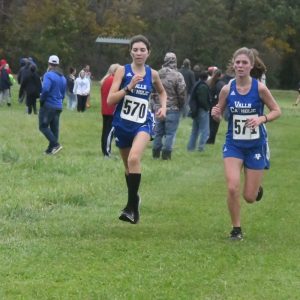 Meanwhile on the boys’ side, after jockeying for position through the midway point of the Class 1 race, Valle Catholic junior Peter Roth emerged and earned medalist honors in a time of 17:26.96 — 12 seconds ahead of Winona’s Kaiden VanWinkle.

“We had a lot of the kids not 100 percent when they ran on Saturday,” Zoughaib admitted, “lots of coughing and hacking. Madelyn wasn’t feeling that well; but, she soldiered on and ran for her teammates. Camryn ran smart as usual, and let the race come to her.”

Griffard, a freshman, clocked in at 21:33.71 while Basler, a senior, recorded a time of 21:34.48 — and the Valle girls claimed the district championship with 63 points, 10 better than host Arcadia Valley.

As for the boys, Zoughaib noted: “Peter did his job, which was to win district, and that he did. His personal record is 17:14.”

That means both Valle Catholic’s boys and girls will be competing as entire teams for the first time since 2012.