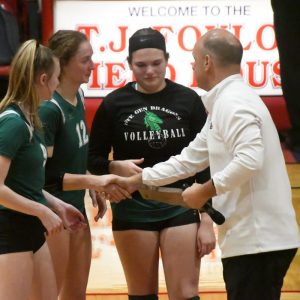 The Dragons finished with an 18-10-1 record, and district runner-up like during the 2020 season when Park Hills Central eventually competed in the state tournament.

The Warriors finished the match with six aces, including a pair from Rachel Blum, and they committed only six service errors.

The Dragons also will lose Elizabeth Basler to graduation, along with student manager Kali Schweigert.

Sure, it was a consolation plaque — but the Dragons continued to show why they are one of the best programs in Missouri yet again this season.

“Each year, we have given ourselves the possibility to be in the district championship match,” Basler noted, “and have fallen short to teams that end up playing in the Final Four. I think this is telling of just how talented and hard-working the girls on our team are.”

Alli Byington served well late in the third set, with a couple of aces, to help the Dragons temporarily stave off elimination.

Dru Koetting pounded down a kill to level the third set at 25-all before the Dragons committed an attack error and Ella Bertram sent a clever tip over the net in giving the Warriors Point No. 27.

The final set was certainly more competitive than the first two.

“In the third set, our defense was determined not to let anything hit the floor,” Basler said. “I believe we made more hustle plays, and those can turn into momentum builders.”

The Dragons were becoming more familiar with a line up Basler set for the match. Ste. Genevieve was building a “comfort level.” However, it was too little, too late.

Devyn Basler carried the Dragon offense to the tune of 24 assists.

Along the front line, Abby Moore posted a team-high 10 kills with seven from Koetting and three from Basler. Arie Taylor served up a team-best three aces.

Dragons 3-0 For First Time In A Very Long Time