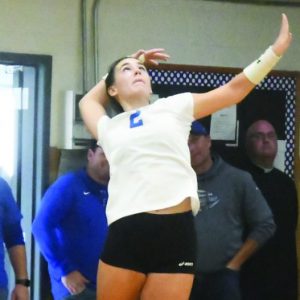 One reason for Valle Catholic’s run of success is the dazzling serving of Rachel Blum (2). (PHOTO BY ERIC VICCARO/Herald staff)

Those shampooing instructions also apply to the Valle Catholic High School volleyball team, who will be returning to the Show-Me Center in Cape Girardeau for the Missouri State High School Activities Association Tournament.

This will mark the Warriors’ 11th state tournament appearance since it began in 1975 — meaning Valle Catholic has reached the pinnacle 23.9 percent of the time.

Fischer said qualifying for the Final Four again is special, even moreso since the Warriors are essentially playing in Class 3.

Columbia Rock Bridge and Jefferson City Helias (another Class 5 school). The results have been comparable.

“I think we both have fared equally well,” Fischer said. “I think they are a talented team, and it will be anybody’s game.”

Fischer said Blair Oaks has a strong back row which also will help make for a competitive match.

The Rebels also had trouble with a cozy confines of Valle’s gymnasium.

Weibrecht chipped in with six kills and one solo ace block.