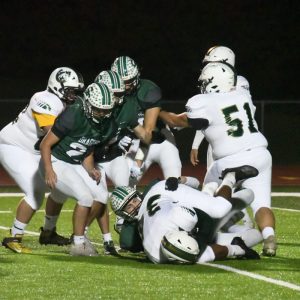 That decision helped set the tone for what proved to be the Dragons’ fourth straight blowout victory.

“We had a feeling that we could potentially come out flat on Friday with the students not having school, and with the weather being wet and cold,” Ste. Genevieve head coach Jay Pope said. “We felt that we need to get a spark early, and the onside kick did that.”

During film study leading up to the game, Pope saw that Bayless struggled with short kickoffs — and that certainly played out — as Ste. Genevieve blasted the Bronchos, 56-8, on a chilly, misty Friday night at Dragon Field.

Both teams suffered through the weather, and the game featured nine total turnovers.

By the end of the first quarter, it was same old song and dance we’ve seen for the past month — Ste. Genevieve clearly in front by 21 points. By intermission, the Dragons were ahead 42-0.

Even the scoreboard clock quit in the second half, so officials kept “turbo time” on the field.

The Dragons picked off four Bayless passes and snagged three Broncho fumbles in the most opportunistic performance of the season.