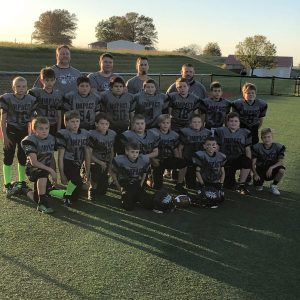 The Impact 10-under football team defeated Potosi, 18-12, for third place in the 10-under division game at Dragon Field. Clint Wolk serves as the head coach, with assistants Scott Wehner, Jerrod Wolk, Waylon Baker and Sam Edwards as the assistants. The complete roster may be found in the Nov. 3 edition. (PHOTO BY MICHAEL BOYD/Herald staff)

Recap: Liam Venz scored the game-winning TD on a 93-yard run with 1:22 remaining in the fourth quarter. That was just after Impact forced a turnover-on-downs with Potosi reaching the Impact 7-yard line. Gegg’s TD came with 38 seconds remaining before halftime. Ste. Genevieve was denied a chance to play for the Super Bowl due to a final standings points system. Grandview defeated Windsor, 22-6, later in the day for the title.