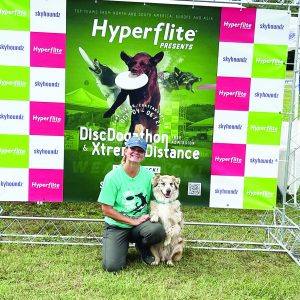 Weingarten resident Nickie Nowak and her Australian shepherd, Leo, have formed a dynamic duo in the distance division of disc dog. The pair recently put on a performance during halftime of a Valle Catholic football game. (SUBMITTED PHOTO/Special to the Herald)

This was not your typical haltime performance, and the fans were dazzled.

It was like watching Valle Catholic quarterback Grant Fallert throwing a long bomb to wide receiver Aiden Heberlie for a Warrior TD.

Nowak proceeded to enroll Leo in an agility lesson, but that didn’t stimulate this athletic pup.

“Then I tried disc, and a light bulb went off in Leo’s head,” Nowak said.

According to the American Kennel Club, Australian shepherds as a breed are smart, work-oriented and exuberant.

These dogs are considered herding animals. AKC considered Australian shepherds to be very good with young children and playful.

The breed needs a high degree of mental stimulation, the kennel club reports on its website: www.akc.org.

These dogs have are energetic and have the highest level of trainability possible, so there’s a lot to like about Australian shepherds.

(For the complete story, subscribe to either the print or electronic editions of the Ste. Genevieve Herald. Subscribe: 1-573-883-2222.)