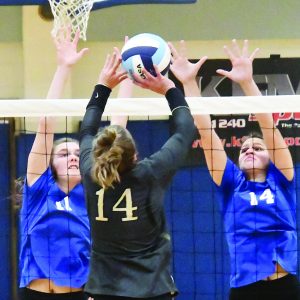 The Warriors did so at the expense of in-town rival Ste. Genevieve.

The Valle “loud crowd” celebrated the achievement with the players, taking a group shot with video posted on our Herald’s Facebook and Twitter social media sites.

“It speaks highly of the kids in town, the type of volleyball players we have,” longtime Valle head coach Nancy Fischer said.

Fischer said Ste. Genevieve didn’t play its best, and that’s the main reason why the Warriors won both sets in convincing fashion.

“I thought we did a nice job of serving,” Fischer said, “and we also attacked the ball well, even when it was out of system. We were still able to have meaningful swings.”

Fischer said conference tournament championships have been few and far between for the Warriors despite their riches of success across the board.

Hailey Weibrecht’s kill sealed the 25th point and the match to beat the Dragons. Samantha Loida also generated a trio of kills — all from free balls that sent Ste. Genevieve scattering around the court.

Ste. Genevieve committed a slew of attack errors in the opening set, and Valle Catholic lived grand, which included a Makayla Joggerst blast down the line for a kill as the Warriors pushed their cushion into double digits.