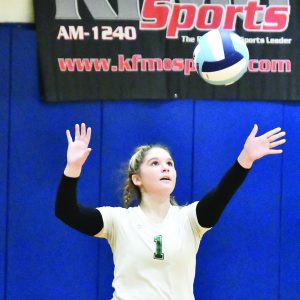 And once again, the Warriors were too good for the Dragons.

Valle Catholic’s Hailey Weibrecht sent a tip over the net onto Ste. Genevieve’s side the court. The ball bounced off the wood, and the Warriors earned a 25-13, 23-17 victory.

The Dragons squared off against Potosi (20-10-1) for the third time this season.

“It’s always a fun match-up when we get the opportunity to play Valle,” Ste. Genevieve head coach Carla Basler said.

“The past two years, it’s been our two teams in the conference championship match,” Basler continued. “We are privileged to coach girls who just work hard and love the game.”

Basler said the Dragons didn’t pass as well as they needed to off serve receive.

“Valle’s passing and scrappy defense gave them the edge to use all of their hitters,” the coach commented.

It was a far cry from when Ste. Genevieve played second-seeded Farmington in the semifinals — with the Dragons coming out on top 25-15, 25-20.

In the loss to Valle, Ste. Genevieve’s attack percentage was a paltry .066, with Tessa Grass putting down five kills and Dru Koetting and Moore four apiece.

The Dragons committed 12 hitting errors, had six reception snafus and they only recorded one ace (from Maya Watts).