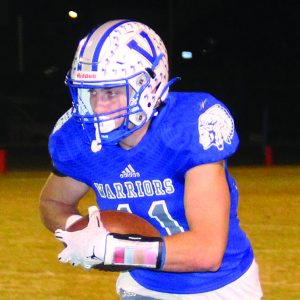 That’s best how to describe Valle Catholic’s 63-0 whitewash over St. Pius X (Festus) this past Friday at Father John Dempsey Field — with the undefeated Warriors waltzing into the playoffs.

Senior defensive lineman Charlie Friedman lived out a dream with a 17-yard interception for a TD. Noah Bauman also scored a TD via interception return during the third quarter.

Junior defensive lineman Tim Okenfuss owned the second quarter, recovering one fumble in the end zone — and returning another one 10 yards for two TD.

It marked the second straight week Okenfuss scored. He also collected a team-best 12 tackle points, including three stops for losses.

“Our defense has been very aggressive all season,” Valle Catholic head football coach Judd Naeger said. “When you play fast and physical, good things happen. It was great to see.”

This marked Valle Catholic’s fourth shutout victory of the season. The Warriors held St. Pius to minus-39 yards rushing. And the Lancers didn’t even come close to one scoring threat, Naeger noted.

Meanwhile, the Valle Catholic offense continued settling in with punishing running back Bryce Giesler, the athletic Heberlie and sophomore quarterback Grant Fallert piling on the points.

Giesler crossed the 1,400-yard threshold, and he scored twice more for 20 total TD on the season. Fallert threw his 12th TD pass. Heberlie has caught 29 passes for 522 yards and nine TD, averaging 18 yards per reception.