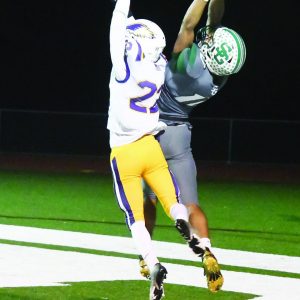 That was until senior safety Klayton Squires pulled off the incredible feat on Friday evening as Ste. Genevieve walloped Brentwood 55-14 at Dragon Field.

“It was awesome to see,” said Pope, who told Squires to roam free as part of the Dragons’ defensive package.

“We put him in position to be a free player,” Pope said. “He (Klayton) also had influence in the run game, and he was able to find the football.”

Squires knew what Brentwood (5-4 record) was going to run before the Eagles did themselves.

Adding a little insult to injury, Squires capped off the Dragons’ scoring with a 75-yard kickoff return to open the second half — which essentially ensured the “turbo clock” for the game’s duration.

had a short field to work with thanks to all those turnovers.

Zach Boyer connected with cousin Aiden Boyer for four TD passes during the first two quarters. All of Zach’s receptions went for scores, and he finished with 173 yards (43.3 yards per catch).

Kaden Flye added a spectacular reception for the Dragons’ second TD of the contest. Austin McBride scored untouched on a 10-yard TD. Kaden Buatte added a 25-yard TD catch in the waning moments of the first half, and the Dragons were up 48-0 at intermission.

What’s more, senior defensive lineman Paul Ahrens blocked a Brentwood punt — setting up McBride’s TD on the very next play. McBride finished with 170 yards on only 12 carries (14.2 yards per tote).

Pope said the Dragon offense has been tuned in exceptionally well in both games and practices for the past month.

Tanner Weiler added nine assisted tackles, and Kaden Buatte added two tackles for loss. Bryant Schwent connected on 7-of-8 extra-point kicks to round out the superlatives.