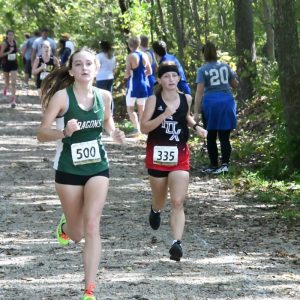 IRONTON — Both the Ste. Genevieve and Valle Catholic cross country programs are gearing up for the district meet set for this Saturday at the Arcadia Valley Sports Complex.

“There is always tough competition in both the girls and boys races,” said Ste. Genevieve head coach Sierra Boyd. “They have combined districts from previous years, so more teams will be competing.”

Boyd said with a larger pool of teams to draw from, the district races will be more compact — especially amongst top competitors.

“Our athletes will need to get into a competitive spot early to give themselves the best opportunity to qualify,” Boyd added.

The top-30 individuals and top-four teams from the district meet will qualify for the Missouri State High School Activities Association meet, set for Saturday, Nov. 6 at Gans Creek Park in Columbia.

Valle Catholic’s girls placed second at state in Class 1 last year, the best-ever finish for the Warriors. Ste. Genevieve’s boys were 10th out of 16 qualified squads.

Since the Dragons ran at the Arcadia Valley Invitational in early September, course experience should expectedly be in their favor.

The course may be flat, but it has enough switchbacks that NFL Hall of Fame running back Barry Sanders would appreciate.

The same could be said for Valle Catholic, who also competed in the Arcadia Valley meet.

Valle Catholic head coach Samer Zoughaib said Arcadia Valley is the team to beat on the girls’ side — but Woodland and Steelville also are squads to watch.

“I think it’s too close to call,” Zoughaib explained. “Whomever shows up to run best will make it out. I have said this many times, the healthiest team will win, not necessarily the best team.”

Senior Camryn Basler was an individual state medalist last year for the Warriors. Other experienced returners are Katie Kertz and Lillian Hoog. Freshman Madelyn Griffard has been a dynamic top-10 performer all season long.

DEXTER — Valle Catholic’s Peter Roth raced in with another top-10 finish this past Saturday at the Dexter Invitational.