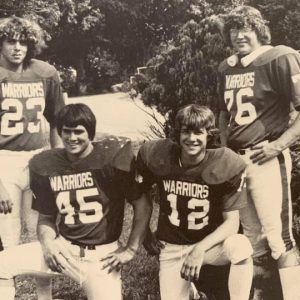 Who can forget that 1966 squad? The Warriors outscored opponents, 535-0, and was reported as “having the talent of a small college team.”

However, for all intents and purposes, Valle Catholic’s modern era began in 1978 under coach Mark Benson — who implemented a program that’s carried on through to today.

Benson served as the head coach, joined by Rick Suarez and Don Boulware as the Warriors’ top assistants. Frank Wetteroth and Joel Sumner also helped pilot the team back then.

“We were young guys,” recalled Benson regarding Valle’s rise to prominence. “Everyone (in Ste. Genevieve) was very supportive.”

Valle Catholic implemented a year-round weight training regimen, with players lifting three times per week — even during the offseason.

The coaching staff began building the program’s numbers, and by 1981 the Warriors were acclaimed throughout the Show-Me State.

“They’re so deep in talent and numbers, it’s ridiculous,” said then St. Vincent head coach Mike Stewart in a September 1981 interview. “I’d vote for them No. 1 in the state right now.”

Eventually, that’s what happened as Valle Catholic shared the Class 2A state championship with Kansas City’s Pius X in a scoreless tie at chilly Busch Stadium that’s still revered to this day.

Players from 1978-83 will be honored during a special ceremony at halftime of the regular-season finale between Valle Catholic and St. Pius X (Festus) this Friday at Father John Dempsey Field.

The festivities continue this Saturday at 6 p.m. with players gathering for a banquet at the Elks Lodge off United States Highway 61. An Italian-themed dinner is set for 7 p.m. The evening will feature video presentations and speakers.

“I had a lot of fun in high school,” said event organizer Cheryl Bauman. “Those were the best years of my life. Football made it an exciting time. I’ve enjoyed doing this for them.”

After coaching and teaching mathematics at Valle Catholic for five seasons, Benson took the head football coaching position at Priory based in St. Louis.