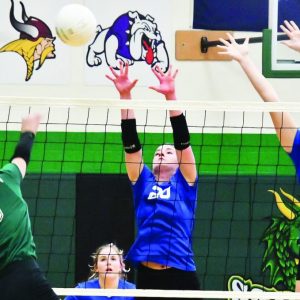 The Valle Catholic volleyball team overcome not just one deficit, but two to defeat Ste. Genevieve in the “Old Settlement Showdown.”

“I thought it took us a while to get started,” Valle Catholic head coach Nancy Fischer said. “I think we starting polishing our skills as the match went along.”

Fischer said the Warriors began blocking better along the front row, and players started to make better connections from passer to setter to hitter.

Feeding off her performance from the Jackson Tournament earlier this month, Macy Wolk continued her brilliant play.

Wolk powered the Warriors with a team-best 15 kills, which Fischer said was a career-high.

“We were fortunate Macy responded well,” noted Fischer, who said Wolk shone bright in the spotlight and shored up the Valle Catholic attack.

As far as blocking was concerned, Bertram had one solo ace block.