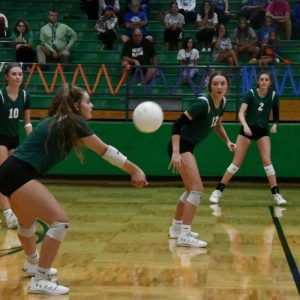 The Dragons were up 16-12 in the fourth set during the “Old Settlement Showdown” match on Monday, Oct. 11, at Peggy J. Johnson Gymnasium.

While Ste. Genevieve dominated Valle Catholic during matches from the 2020 season, including winning the Mineral Area Activities Association postseason tournament, this year provided a different outcome.

“We came out strong in Set One against Valle, and played consistently,” Ste. Genevieve head coach Carla Basler said.

Basler said the Dragons (16-8-1 record) passed their best in the first set — and again early in the fourth salvo — when Ste. Genevieve commanded the lead.

However, green-and-white struggled to remain consistent. And the Dragons “just made too many errors to pull off the win,” Basler said.

Still, Ste. Genevieve had a competitive showing in what could be a preview of both the conference and district tournament championship matches.

Valle Catholic played with presence, and wound up limiting Ste. Genevieve to a .090 hitting efficiency. The Dragons committed 28 hitting errors, which proved to be the difference.

However, Valle Catholic changed up its attack by moving it out to the wings, both left and right.