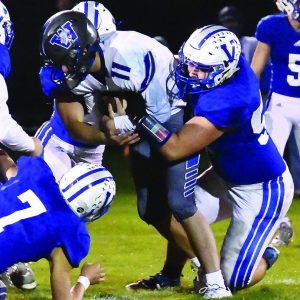 The Warriors were ahead, 25-7, and the Wildcats seemed to be gaining confidence.

It all proved to be fool’s gold as Valle Catholic scored the game’s next 26 points, and the Warriors neutralized Minner for most of the second half en route to a 51-14 victory at Father John Dempsey Field.

“We switched up personnel a bit,” Valle Catholic head coach Judd Naeger noted, “to get more hats to the ball. Coach (Nathan) Gegg noticed something, and made some quick adjustments.”

Naeger also heaped praise on Minner, who accounted for most of the Wildcats’ offense with 128 total rushing yards.

“He was a very physical runner,” the coach added.

This marked the first game all season in which wetness played a factor. Both the Warriors and Wildcats combined for six turnovers, including two lost fumbles apiece.

Bryce Giesler continued to showcase his skills, with 1,271 yards and 18 TD on the ground this season — including three TD versus Westminster.

“Coach (Joe) Roth has done a great job with the linemen all season,” Naeger said. “They have played smart, physical and nasty. We must continue this as the season progresses. And it’s hard to get a good hit on Bryce.”

Michael Okenfuss was a key factor on defense, with four tackles for loss and three quarterback pressures. Both Josh Bieser and Okenfuss forced fumbles and Jacob Calbreath recovered a punt in the end zone for a TD.