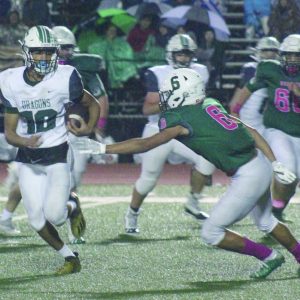 Ste. Genevieve’s Kaden Flye avoids a tackle on an interception return for a TD during Friday’s game at DeSoto. Our Dragons routed their Dragons, 54-15. (PHOTO BY MICHAEL BOYD/Herald staff)

After two weeks of laughers, it’s time for the Ste. Genevieve High School football team to get serious.

Ste. Genevieve will play host to Brentwood at 7 p.m. Friday in a battle between two teams with identical strong 5-3 records.

Head coach Jay Pope said the Eagles will be a challenge — especially with all the variables at play versus a city school.

“It’s hard to judge St. Louis city teams,” Pope admitted. “The teams vary from year to year, and COVID-19 has been a factor.”

For instance, the game between Ste. Genevieve and Brentwood scheduled last year was cancelled due to the coronavirus.

Brentwood will present a diverse mix of old-school offense and futuristic style defense.

The Eagles will operate an unbalanced wing-T offense reminiscent of generations ago while defensively Brentwood runs primarily a nickel defense. Expect to see five defensive backs on the field at once.

Pope said the Eagles will have plenty of players to watch, including running back John Clay and monstrous offensive lineman Jordan Shields — who tips the scale at nearly 350 pounds. Clay has 18 TD this season, to go with 758 yards.

“John is fast and runs well in space,” Pope said. “They run to Jordan’s side of the field 90 percent of the time.”