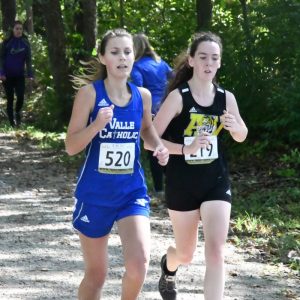 Griffard established a new school record time of 20 minutes, 39.02 seconds at the Farmington Invitational in Engler Park on Saturday afternoon.

She was sixth place overall in a highly competitive field of 99 girls.

Zoughaib was understandably proud of the Warriors’ effort — which includes a team-bonding run early Thursday mornings throughout downtown Ste. Genevieve, with athletes adorned in fluorescent colors and reflective shirts.

“This was by far one of our best performances across the board,” the coach commented. “Every kid that ran, got a personal record.”

Ste. Genevieve head coach Sierra Boyd also was pleased with the proceedings, which gave the Dragons one final tune up before the Class 3 district race at Arcadia Valley in Ironton on Oct. 30.

“Farmington’s course is flat, which is similar to Arcadia Valley’s course,” Boyd said. “It was a great opportunity for a quality race. All of the varsity boys raced well, and were ready to compete at a high level on Saturday.”

Both Valle Catholic and Ste. Genevieve will take different approaches this weekend as a means for becoming district-ready.

The Warriors will compete at the Dexter Invitational at the high school. The Dragons will be off, recharging mentally and physically for the playoffs in less than two weeks time.

Valle Catholic’s Peter Roth registered the second-fastest time ever among Warrior boys, taking eighth overall with a time of 17:14.24.