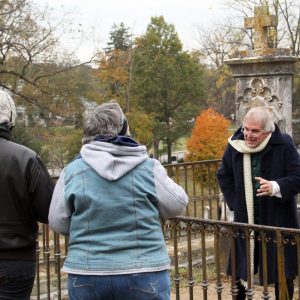 Important figures from Ste. Genevieve’s 18th and 19th century will walk the sacred grounds of Memorial Cemetery the night of Oct. 23.

The 19th Annual Deja vu Spirit Reunion, sponsored by the Foundation For Restoration of Ste. Genevieve, will take place 5-8 p.m. that evening.

This year the event will have a twist. The “spirits” will march from downtown to the cemetery at 4:45 p.m.

The reunion was one of the very few local 2020 traditions that took place despite COVID-19.

“It was one of the few things I think that was going on at that time in Ste. Genevieve,” said long-time Foundation member Ellie Douglass. “We didn’t have as many visitors as we usually have, but we had almost 100 people. We were hoping we would have 75 or 80.”

Now that things are somewhat back to normal, she hopes to see even more people come out.

“We’re hoping that this year we have more people,” Douglass said. “We’ve had a lot of inquiries.”

A total of 31 spirits will be portrayed by Foundation members, local residents and others with an interest.

According to Douglass, this year some new blood is joining the cast.

Ryan and Angie Hassell, teachers from Farmington, are new additions to the spirit lineup this year. They will portray victims of the 1852 explosion of the riverboat Dr. Franklin II, near Ste. Genevieve.

“The Hassells had contacted me the year before, before they left the Spirit Reunion and said they would really like to be involved,” Douglass said.