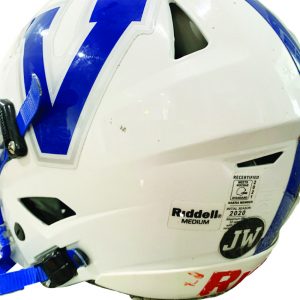 The initials “JW” adorn the Valle Catholic football helmet. “JW” is for “Big” Jim Wilder, who passed last week at the age of 79. Wilder was a longtime Warriors supporter. (PHOTO BY BELLE FALLERT/Special to the Herald)

Then the typically stout Warrior defense kept the Eagles off the scoreboard during the final three periods en route to a 64-22 victory on the road.

Valle Catholic improved to an unblemished 7-0 while New Madrid County dropped to 5-1 overall.

“The first quarter was certainly wild,” Valle Catholic head coach Judd Naeger said. “The offense did a good job of answering their scores, and eventually the defense settled in.”

Naeger said the Warriors went back to their base defense, and New Madrid County quarterback Matt Riley was 1-for-12 during the final three quarters.

This was the type of win Valle Catholic needed — with the playoffs beginning at the end of October.

“Anytime you play a good team, it helps to get you rolling for the playoffs,” Naeger explained. “We certainly have some things we need to shore up.”

Adrian Smith and Ken King caught TD passes to keep the Eagles close, with Valle Catholic ahead 34-22 at the end of one quarter.