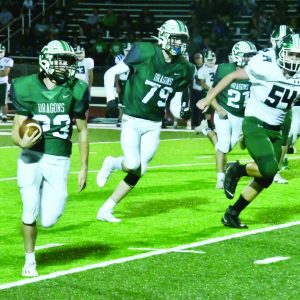 Ste. Genevieve’s Klayton Squires (23) and Will Vaughn (79) head toward Perryville’s end zone during Friday’s 61-7 Homecoming win over the Pirates. Squires also was a member of the Dragon Homecoming Court. (PHOTO BY ERIC VICCARO/Herald staff)

What’s At Stake: Valle Catholic will look to remain unbeaten.

Admission: $4 for adults and $2 for students

Last Year: The two schools last played each other in 2005.

Note: This will be De Soto’s Senior Night game.

Series: The Dragons have won the last 12 games in the series dating back to 2000.

Admission: $3 for adults and $1 for students.