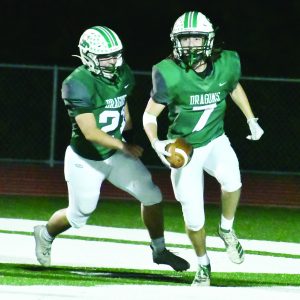 Ste. Genevieve’s Thomas O’Brien (7) reacts after scoring a TD from Will Vaughn’s blocked punt during the first quarter of Friday’s Homecoming game versus Perryville. The Dragons swashbuckled the Pirates, 61-7. (PHOTO BY ERIC VICCARO/Herald staff)

And that Aiden Boyer-Zach Boyer pass connection worked like a charm for two more scores as Ste. Genevieve experienced a happy Homecoming with a 61-7 victory over visiting Perryville at Dragon Field.

“All of the hard work culminated in those defensive scores,” Ste. Genevieve head coach Jay Pope said. “It was a cool experience for those in the Homecoming court, which made it more special.”

Pope said one of the goals in the game was to reignite the passing game, and Aiden Boyer was a perfect 6-for-6 with 172 yards and three TD.

And the Dragon secondary played its best game of the season, with interceptions from Carter Klump and Mason Nix. This was Nix’s first-ever career varsity pick.

Ste. Genevieve set the wheels in motion for a rout early in the first quarter as Will Vaughn blocked a Perryville punt. O’Brien scooped it up and went seven yards for the score.

Klayton Squires wrapped up the first-quarter scoring with a 28-yard fumble return for a TD. Klump added a 44-yard interception return for a TD with 5:21 left in the second quarter. Presto, the score was 55-0 in favor of Ste. Genevieve.