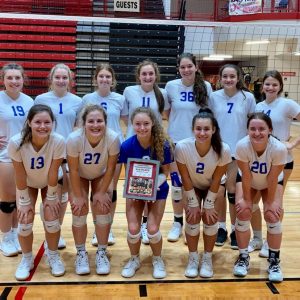 The Valle Catholic High School volleyball team shows off the second-place plaque it earned on Saturday at the Jackson Tournament. The Warriors went 3-0-1 in pool play, before beating Mehlville and Lindbergh in bracket play. Valle Catholic eventually lost to Class 5 Helias Catholic in the championship match, pushing the Crusaders to three sets. (SUBMITTED PHOTO FROM STACIE SARGENT/VALLE CATHOLIC SCHOOLS/Special to the Herald)

The Warriors, who the Missouri State High School Activities Association bumped up from Class 2 to Class 3 due to the school’s “championship factor,” placed second at the Jackson Tournament on Saturday.

Valle Catholic stands at 21-4-3 after playing seven matches on Saturday, and the Warriors learned their fate for the Class 3 District 2 Tournament starting on Oct. 21.

The Warriors were announced as the No. 1 seed, and they will play either Park Hills Central or Arcadia Valley in the district semifinals at 5 p.m. on Oct. 25.

That set up a match against Helias Catholic of Jefferson City, another Class 5 school. The Warriors extended Helias to three sets before falling by scores of 25-14, 20-25, 25-16.

Sam Loida ran Valle Catholic’s 5-1 offense to the tune of 23 assists, and also she won 14 points on her serve, one ace and had two ace block assists.

In the championship match versus Helias, Bertram powered down 11 kills and Weibrecht had eight. Makayla Joggerst and Bertram both had two ace block assists along the front line.

Joggerst also won a team-high eight points off her serve, with one ace, and she had 14 digs. Mia Weiler also contributed 14 digs and Sam Loida 12 as the Warriors totaled a whopping 65 for the match. Loida also distributed 30 assists.