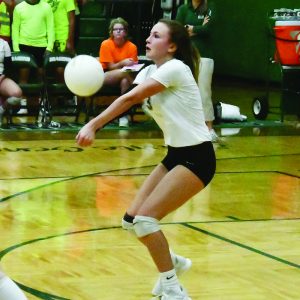 For the Ste. Genevieve High School volleyball team, last Thursday’s match versus Potosi served as a “preview of coming attractions.”

That’s because the Dragons will face Potosi again in the Class 3 District 2 tournament at 6:30 p.m. on Oct. 25.

But first, Ste. Genevieve will need to get through the Mineral Area Activities Association conference meet, which begins on Thursday, Oct. 16 and runs through Tuesday, Oct. 21.

“We’ve been playing pretty well with our full lineup back in swing,” said Basler, with the Dragons improving to 13-7-1, and winners of eight of their past nine matches. “I believe we can fare well in the tournaments if we play our game and play consistently.”

Basler said Potosi is Ste. Genevieve’s top priority, even after a stout performance last Thursday — the Dragons stopped the Trojans in three sets by scores of 25-15, 25-18, 25-15.

“It’s always imperative to prepare for potential match-ups, but, we cannot overlook any team in the process,” Basler cautioned.

The win over North County last Tuesday gave the girls confidence, and they have been playing clean, competitive volleyball.

The Dragons worried more about accuracy than power behind the service line, with four aces a team and just one missed serve all evening.