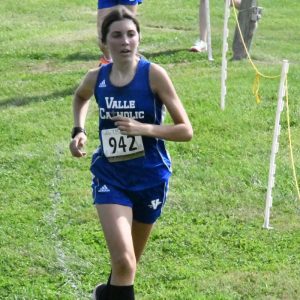 Valle Catholic’s Camryn Basler became the first female in school history to be named all-conference twice in a career after completion of Saturday’s meet. (PHOTO BY ERIC VICCARO/Herald staff)

POTOSI — For Valle Catholic head coach Samer Zoughaib, he noted many firsts that helped turn the Mineral Area Activities Association conference meet into a memorable one.

Peter Roth has solidified himself as one of the top runners in the region, and his sixth-place finish at Saturday’s meet only echoed such sentiment.

This also was the first occasion that two Valle girls were named all-conference in the same year.

Alayna Sparr from Farmington was the girls’ medalist, with a time of 20:52.51, 13.2 seconds faster than teammate Breanna Mathes.

Zoughaib said many of the Warriors ran strong times, with some personal records.