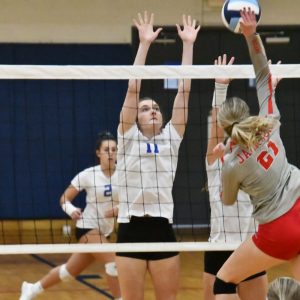 Valle Catholic, which was bumped up to Class 3 this year, showed it could play well against a fierce opponent. However, Jackson was the more consistent squad at winning points.

“Jackson is both physically imposing, and they are also very quick,” said Valle Catholic head coach Nancy Fischer. “We can deal with a tall team and we can deal with a quick team. But, we have a hard time with teams that are both tall and quick.”

For the Warriors, the rest of the opponents on their schedule are more manageable — save for the “Old Settlement Showdown” set for Monday, Oct. 11.

The Indians also have a crafty junior setter/outside hitter in Kamryn Link who delivered free balls onto Valle Catholic’s side of the court — finding a hole in the Warriors’ coverage to score plenty of points.

Mia Weiler scored a team-leading 16 points off her serve, with two aces. Samantha Loida returned to the line-up versus Jackson, and she also served up two aces. As did Rachel Blum. Mia Weiler also was tops in digs with 14, while Joggerst had six.

Ade Weiler received the most Jackson serves with 33, and sister Mia 22. Loida and Joggerst joined forces for 31 assists as the Warriors tried to stymie Jackson with a 6-2 attack.

Jackson finished the match with a .331 attack percentage, including Domian’s 17 kills. Vandeven and Trankler both had four solo ace blocks. Hannah Guilliams had 15 digs and 32 service receptions. And then there’s Link, with a massive 49-assist performance.

“Volleyball is a team sport, so one player did not win the game for Jackson,” Fischer said. “They have very nice balance — good defensive players, a good setter and good swingers. They also served effectively against us.”