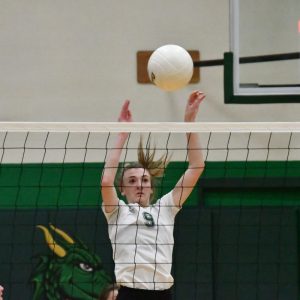 Ste. Genevieve senior middle hitter A.J. Prudent blocks the ball during a match against rival Park Hills Central from Tuesday, Sept. 28. Prudent has been averaging four ace blocks per match during the past two weeks. (PHOTO BY ERIC VICCARO/Herald staff)

FARMINGTON — Both the Ste. Genevieve and Farmington High School volleyball teams have played entertaining matches the past two years.

Last year, the Dragons and Knights squared off in the first-ever five-set match in Peggy J. Johnson Gymnasium history — with Ste. Genevieve earning the win.

“Farmington was a tough match-up for many reasons,” said Ste. Genevieve head coach Carla Basler. “We ultimately made too many errors on our end. With a team as talented as Farmington, it is always going to be difficult to pull off a win when we make a lot of mistakes.”

Basler said she will use the loss as a learning tool, especially with the season now careening toward the playoffs — which begin with the Mineral Area Activities Association tournament in two weeks.

“We played much better and more consistently,” Basler noted.

The Dragons currently stand at 10-7-1, and in a tie for third place in the MAAA Large School Division with Fredericktown.

Despite the loss, there were some statistics to crow about.

Both Tessa Grass and Dru Koetting provided double-digit kills with 10, and Arie Taylor wasn’t too far behind with nine. A.J. Prudent and Grass both had four solo ace blocks. Lexy Parmer and Koetting served up two aces. Devyn Basler ran the Dragon offense to the tune of 35 assists.

In the victory over Park Hills Central, the Dragons put together a .198 attack percentage and served up 10 aces. Maya Watts was extremely effective with her serves, yielding four aces, and she paced the team in digs with 14.

The Dragons had such an easy time against the Rebels by dominating at the net. Both Abby Moore and Prudent posted five solo ace blocks, and Koetting had two. Overall, the Dragons had a whopping 15 solo blocks.