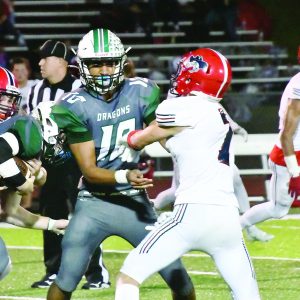 It’s easy to spot when the Ste. Genevieve High School football team is destined for a loss.

During all three of the Dragons’ defeats this season, they have had trouble scoring in the red zone.

And that’s what happened last Friday as Ste. Genevieve bogged down in the red zone while rival Park Hills Central was able to muster enough offense while sustaining drives.

It resulted in a 28-14 victory for the Rebels at Dragon Field on a muggy Friday evening — a game that ran at breakneck pace.

What’s more, an Aiden Boyer first-quarter rushing TD was called back due to a holding penalty — which also could have completely changed the complexion of the contest.

“I feel like our coaching staff has done a good job this season making sure players rest after a negative play, and move on to the next one,” Ste. Genevieve head coach Jay Pope explained.

“Our counter-punch was running the football, and it was effective,” Pope said. “But, it just wasn’t consistently good enough to come away with a win in the end.”