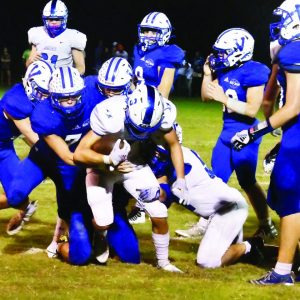 Dempsey Field, which looks immaculate after Bauman Contracting laid down a thick layer of asphalt on the track, was the site of another dominating performance from hometown Valle Catholic.

“It was great to get everyone in (the game), and it was especially nice to see the young guys preserve the shut out,” Valle Catholic head coach Judd Naeger said.

In the second half, Isaac Roth and Rylan Fallert scored TD on long gainers and the Warriors reserves preserved the shut out. Valle Catholic’s defense has posted three whitewashes this season, and surrendered just 35 points through six contests.