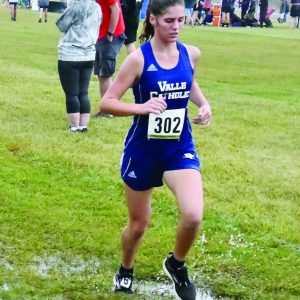 Valle Catholic’s Peter Roth was the top finisher, taking 12th place in a time of 18:24.98 — an outstanding time considering how muddy conditions became.

“The course was a pond,” Valle Catholic head cross country coach Samer Zoughaib said. “In some places, there was one or two inches of standing water. But, those that ran, ran well considering the elements.”

Both Ste. Genevieve and Valle Catholic were tuning up for this week’s Mineral Area Activities Association meet at Potosi’s City Park.

Braden Coleman turned in the Valle Catholic’s boys’ next best time in 19:08.40, which was good enough for 29th.

“The course was very wet, and there were some slick patches,” Ste. Genevieve cross country coach Sierra Boyd said. “Their shoes were soaking causing them to be heavier than normal.”

Traction was poor, and runners’ shoes sunk into the ground like eating the first bite of a sandwich.

In between the varsity boys’ and varsity girls’ race, there was a downpour — which worsened the field considerably.