For Mike “Skip” and Kim Weiler, a family connection led them to buy and save a living piece of regional history.

The once stately mid 19th-century German brick house just west of Interstate 55 on Highway 32 had sat empty and had deteriorated into a sad spectacle by the time they bought it in 2014.

As they threw themselves into the project, they learned of the house’s fascinating history and its connection to one of Missouri’s most iconic roadways. 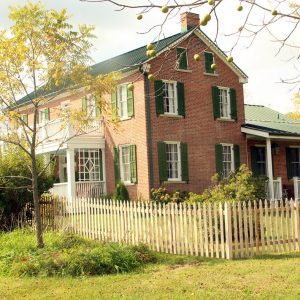 Joseph E. Sauer received a grant for the land the house stands on in 1851. Weiler believes the house was built in 1852.

Sauer was heavily involved in the Plank Road.

“He built the house about the time the Plank Road was going up because he was the one that sold the 30,000 shares of stocks at $50 a share to have Jonathan P. Kirkwood, a civil engineer, map it out from Ste. Genevieve to Iron Mountain, 42 miles,” Weiler said. “At that time it was considered the longest and most famous plank road in the history of the United States.”

Sauer was a merchant who ran a store and post office  on the property, which was the eight-mile marker for the Plank Road. Weiler said it is likely he also operated a toll both there.

The ghostly remains of the store/post office and Sauer’s warehouse, with attached outhouse also probably built in the early 1850s, still stand near the house. Weiler said he found the foundation of another outbuilding, as well.

The county had four post offices in the 1850s, Ste. Genevieve, St. Mary, Avon and the Plank Road P.O.

Sauer was married to the former Mary Ann Ponder.

In the 1860 census showed Augustus Beizer, a 23-year-old farm laborer from Baden, Germany, living with them, along with a domestic servant, Josephine Armbruster.

Josephine would marry Benedict Huber in 1866

Weiler noted that the house has ties to the Sexauer, Jokerst, Bieser (Beizer) and Huber families, still established in the county.

NOT HAPPILY EVER AFTER

Sauer thrived for years,but the bottom eventually fell out for him, financially.

“The Plank Road failed because of the railroad going straight from Herculaneum straight to Iron Mountain,” Weiler said. “So, he ended up eventually going bankrupt.”

By the early 1870s, Sauer had lost the property, which also included stables on the other side of the road.

Weiler said Sauer moved to Fredericktown about 1872, then later to Pittsburg, Kansas, eventually dying about 1902.

The house and property were bought by St. Louis residents Timothy and Susan Cody in 1872. He said he has found no evidence that the couple ever lived there.

In 1891 it was bought by Conrad Bechle, a local farmer, who married Louise Schmelzle. She was an older sister to Kathryn Schmelzle, who married Joseph Jokerst.

Joseph and Kathryn Jokerst wound up buying the property in 1906 and lived in the sturdy brick home until their death just weeks apart, in 1972.

This was the link that first interested the Weilers in the property, as the Jokersts were great grandparents to Kim Weiler.