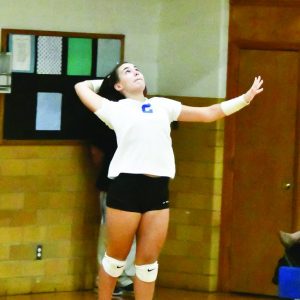 BONNE TERRE — The Valle Catholic High School volleyball team was down two sets to one last Thursday at North County.

Like she’s done in the past, senior Rachel Blum came through with a pivotal serving run — and the Warriors downed the Raiders 25-15, 17-25, 18-25, 25-14, 15-8 in this clash between the Mineral Area Activities Association’s large and small school divisions.

“We were sparked by Rachel’s serving streak in the fourth set,” Valle Catholic head coach Nancy Fischer said, “and we were able to get a nice lead. Once we had that lead, it seemed that we did a better job attacking at the net.”

With the win, Valle Catholic improved to 13-2-2 heading into Tuesday’s challenging home match against a very tall Class 5 Jackson unit.

Blum scored 12 points off her serve, which included a pair of aces. Rachel also scooped 11 digs, and she had 13 serve receptions.

With starter Sam Loida still out due to injury, Kristen Drury and Joggerst served as setters in the Warriors’ 5-2 offense — combining for 39 assists.