Many insights were gained into life in Ste. Genevieve and surrounding areas during centuries gone  by, at the 19th Ste. Genevieve History Conference on Sept. 18.

Put on by the Foundation For Restoration of Ste. Genevieve, the annual event had been cancelled in 2020 by the COVID-19 pandemic and was set up to ensure social distancing this time around. A smaller, but enthusiastic crowd attended the five lectures. 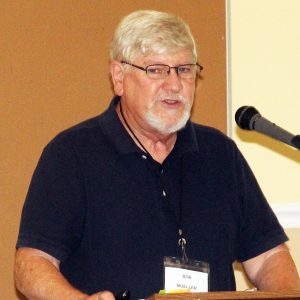 Her lecture, “Un ‘mariage inconstant’: Guillaume Pottier drafts a will, and the Louisiana Superior Council rejects it,” examined women’s rights in the Illinois Country and the situation faced by illegitimate children during the colonial era.

Dr. Adam Criblez, director of the Center For Regional History at Southeast Missouri State University, gave “History of Early Cape Girardeau.” He noted how that fellow river town has been a melting pot of various cultures from the very beginning.

Dr. Will Thompson, chairman of the Department of World Languages and Literatures at the University of Memphis, presented “Fictional Portraits of the French Creoles of the Illinois Country.” He listed numerous examples of how the inhabitants have been portrayed over the years.

Chris Collins, superintendent of the  Ste. Genevieve National Historical Park was scheduled to give an update on the park following Thompson. Collins, however, sent out email messages Saturday morning that he was feeling ill and was cancelling as a precaution.

Dr. David MacDonald, emeritus professor of history at Illinois State University, then turned the focus on  local American Indian tribes and their relations with the settlers in “Jean-Baptiste Ducoigne, an Under-Appreciated Leader of the Kaskaskia Tribe”

Mueller noted that the French were “wonderful writers,” leaving some intriguing descriptions of properties.

He said he found 252 descriptions of town lots, going back to 1757. He said he tried to separate them from the old town and the new town. He said he also included New Bourbon with New Ste. Genevieve. Mueller found 161 deeds, two building contracts and 80 estate inventories, which he called “one of the best things we have in our records” for getting an idea of what life was like.

Mueller also found that  there were 160 poteaux en terre buildings. Of those, 89 gave sizes of the structures. The average size was just was 478 square feet overall, ranging between 145 and 1,235 square feet. In the new town, the average was 468 square feet, with the smallest being 159 square feet.

He also mentioned find other building styles, in addition to the familiar poteaux en terre and poteaux sur solle. One was poteaux en cannelé/en coulisse, with posts or boarded in a grooved vertical post. Another was  piece sur piece or maison en boulin, built with horizontal, rather than vertical logs. There was one other – seen only in the old town, maison de columbage, which used widely-spaced vertical posts.

Mueller said he was struck by how small may of the houses were, as compared to surviving examples like the Louis Bolduc House and others. Another surprise was that galleries were only mentioned six times, and only three of those wrapped all the way around the house. There were also only two attics mentioned.

Another interesting fact was that the 116 mentions of barns indicated that their square feet was an average of 861 square feet – considerably bigger than the houses.

Mueller came away believing that the survival of so many of the nicer colonial homes have given researchers an inaccurate picture of how things really were in the village.

“We do tend to describe the past on what exists today,” he said. “The poteaux on terre was the most dominant style of construction of houses and colonial towns were a lot more diverse in their style of architecture than what is currently portrayed.”

He added that descriptions of the old and new towns during the colonial era should be “more inclusive” and avoid  “cookie-cutter” descriptions.