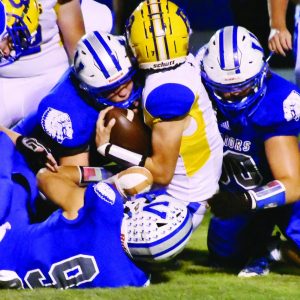 The Warriors played with a short field throughout Friday’s game, scoring 26 first-quarter points en route to a 42-0 whitewash over St. Francis Borgia in the first-ever meeting between these parochial powerhouses.

And Michael Okenfuss’ blocked punt early in the first quarter set the tone against a St. Francis Borgia squad that lost 24 players to graduation from 2020.

“It was nice to get up early, and get everyone in the game,” said Valle Catholic head coach Judd Naeger.

Once again, Valle Catholic won a game with an overpowering performance from both its offensive and defensive lines.

“The offensive and defensive lines once again played very well, and are meshing and working as one unit,” the coach added.

Bryce Giesler continued to showcase his talent, with two TD running and one receiving from 16 yards away during the third quarter on a nifty flare from sophomore starting quarterback Grant Fallert.

Josh Bieser recovered a fumble and Grant Fallert also recorded an interception during the first quarter — giving the Warriors the field position to score easily.