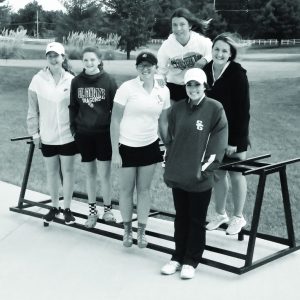 The girls played in a pair of “traditional” tournaments on Monday, Sept. 20 and Tuesday, Sept. 21 at the St. Clair Tournament and Farmington Quadrangular, respectively.

Then things got interesting last Wednesday as the Dragons participated in a match-play event similar to the Ryder Cup — the second straight day the girls competed at Crown Pointe Golf Club and Resort in Farmington.

Ste. Genevieve wrapped up the week with a two-girl scramble on Friday at Westminster’s Paradise Valley Golf Club.

“We played regular stroke for a match, and a tournament on Monday and Tuesday,” Ste. Genevieve head coach Rachel McDaniel said. “Wednesday was match play, and Friday was a two-person scramble. I loved the variety because it allowed the girls to manager their game and the course, differently, based on the format.”

McDaniel was happy to see the Dragons stay busy, with four events in five days.

“It’s not a bad thing to keep busy, and it certainly isn’t bad to have a competition-heavy week,” the coach commented. “The girls learned a lot about stamina, and I’m proud of how they handled themselves.”

Yamnitz walloped Gwen Griffith from Ladue, 6 and 4. Naeger came through with a 5 and 4 triumph over Angela Payne from Eureka. Heller had the tightest victory of them all, 3 and 1 over Caitlin Pryzbylski of Lafayette.