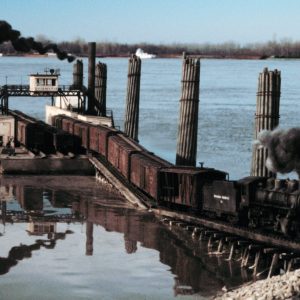 Late in their lives, many people begin thinking about what legacy they will leave behind.

For internationally acclaimed modeler Lewis Pruneau, who died Sept. 12 at age 77, that legacy is a tangible one.

Among his many highly-acclaimed works, the stunning nine by 11-feet diorama he completed in 2000, depicting the village of Ste. Genevieve as it probably looked in 1832, is a legacy that should endure.

Pruneau achieved the reputation of being one of the world’s best creators of intricate scale models and dioramas.

Locally, he is best known for the 1832 diorama.

His attention to detail drew rave reviews on this and all of his works.

He also did an intricate model of the railroad transfer ferry that used to run in Ste. Genevieve.

Much of his work has been military-related, included a scene from the movie “Das Boot,” aboard a German U-boat.

Pruneau burst upon the big-time modeling scene in 1984, when his 135th scale model of “Dora,” a World War I German railroad gun, won first place at the International Plastic Modelers Society (IPMS) national  competition. It was then featured on the cover of the February 1985 issue of “Fine Scale Modeler,” the leading publication for the field.

He co-authored a book, “Superdioramas,” with fellow modeling legend Bob Letterman in 1986.

Sheperd Paine, arguably the best known figure in the genre, once called Pruneau “the Cecil B. DeMille of diorama builders.”

Pruneau was the first artist to win “Best in Show” at the IPMS nationals two years in a row.

Despite his international reputation, Pruneau remained in Ste. Genevieve, where he was active in the Church of Ste. Genevieve until the final weeks of his life.